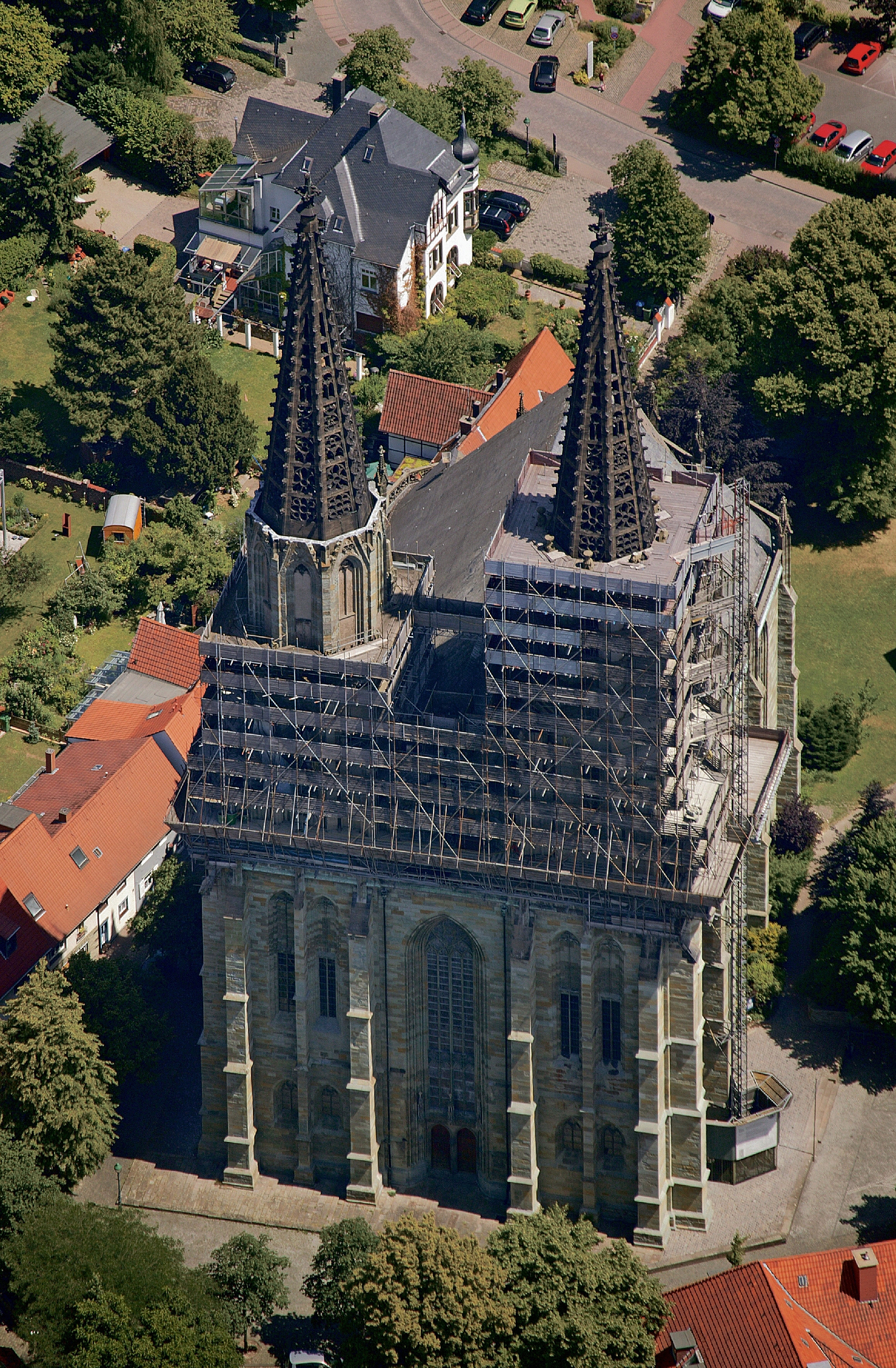 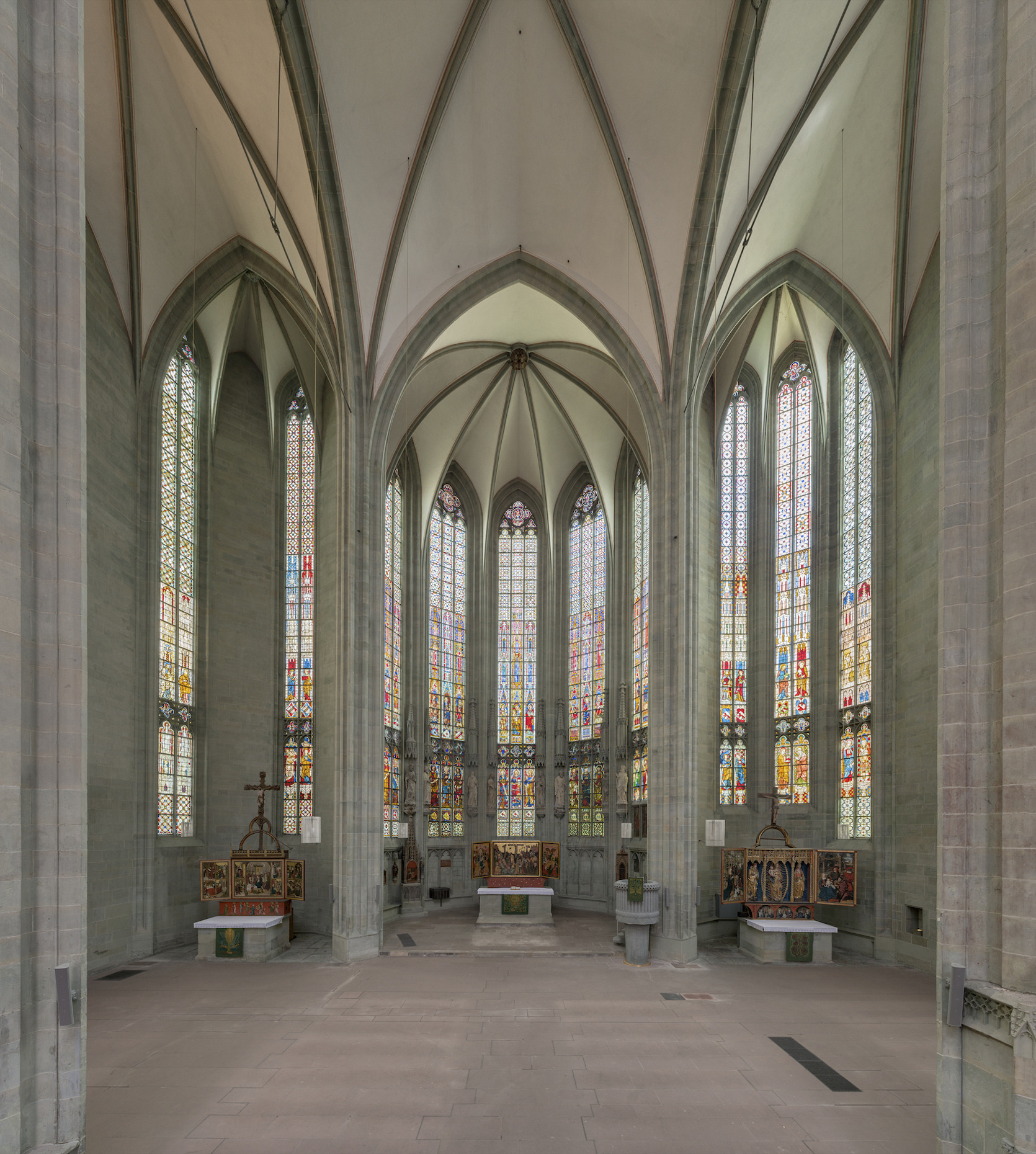 View of the choir of the Wiesenkirche 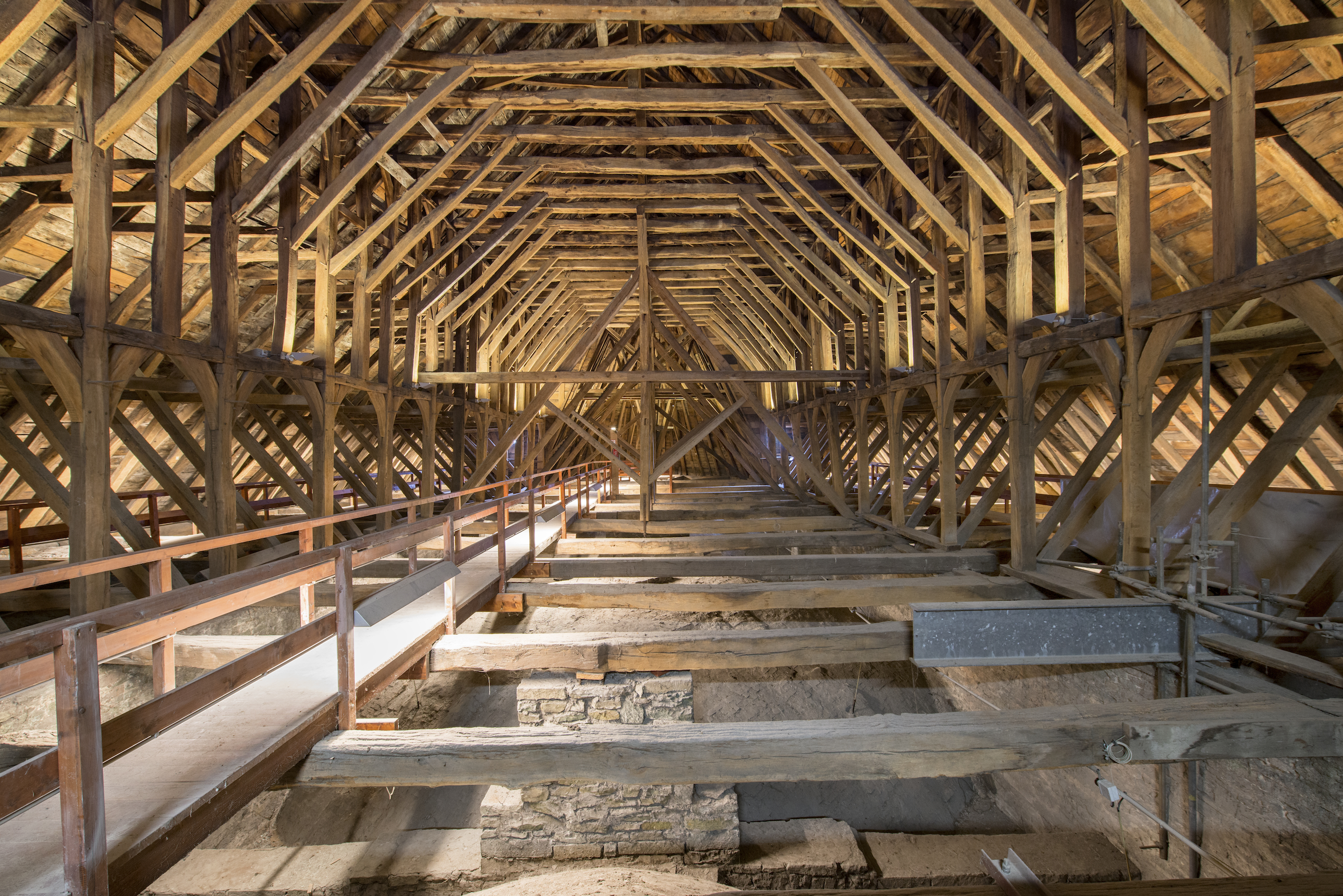 View of the medieval roof truss 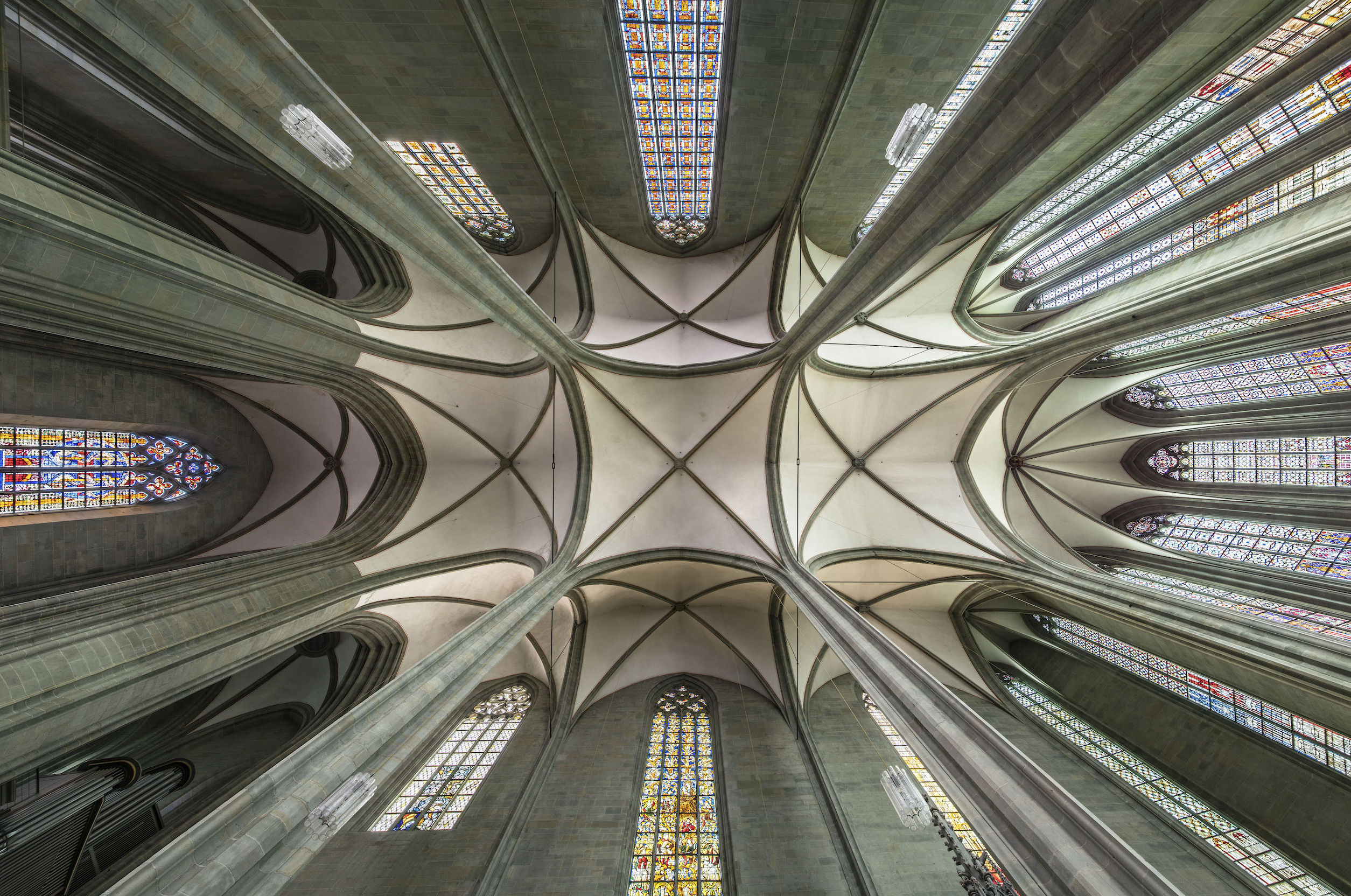 View of the vault 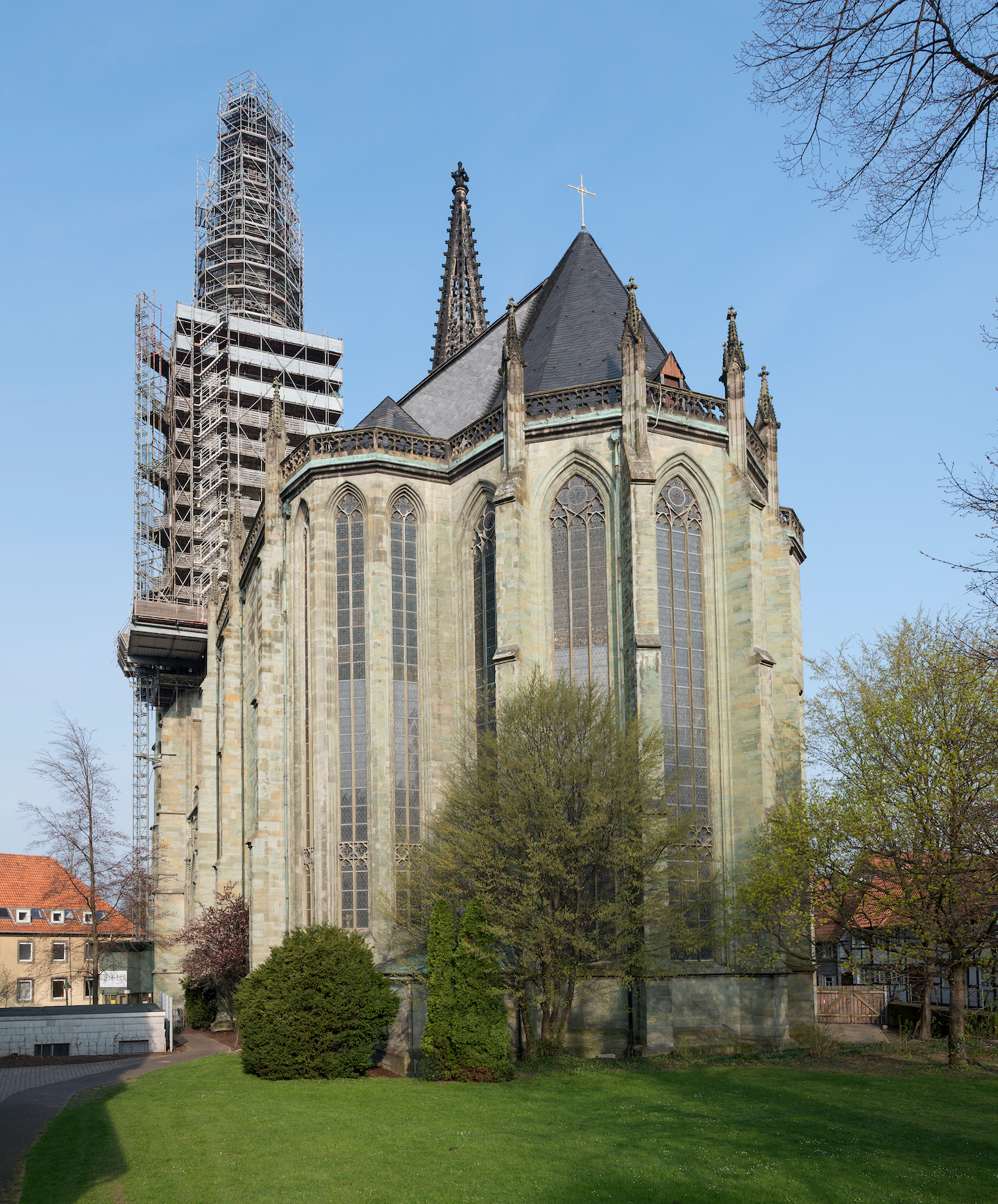 With grace and tranquil beauty, standing at the north of the historic centre of Soest is the gothic church, St. Maria zur Wiese, also known as the Wiesenkirche.

The place of worship is the middle-age expression of self-assured Hanseatic bourgeoisie. The striking dual towers immediately characterise the building as a cathedral; although somewhat sparse, the walls are as finely designed as they are constructionally segmented, with their numerous, large and low-reaching window openings.

Unencumbered by weight, the arching of this hall church completely spans the interior. The featuring outlines of the slender pillars merge seamlessly into the bays. The construction of the excellently proportioned choir in the first half of the 14th century was a perfect synthesis of stone and glass. The epoch encompassing glass landscape constantly provokes a changing atmosphere. The mood evoked by the light in the entire space varies according to the weather conditions and the season, accompanied by the many nuances given off by the shimmering stone’s colours and surface texture.

During some 200 years of medieval construction, the original plan of the first master builder was honoured by all successors. The manifesto of an image of the heavenly Jerusalem on earth is revealed harmoniously in the interior. The grandiose spatial structure is directed to visual perception, with the acoustics of the room setting limits to music.

The Wiesenkirche houses high quality individual works of art from several centuries. The most famous is the window of the “Westphalian Supper”, created around 1500. But the identity of the master of this work remains unknown.

The masons’ lodge – BAUHÜTTE WIESENKIRCHE SOEST – is a masons’ lodge and workshop based around the cathedral. In keeping with the times, it is a non-commercial, state-run institution for the sole purpose of a single building project. It was planned and sponsored by the state of North Rhine-Westphalia 1990-1992 as the “establishment of a masons’ lodge and workshop at the Wiesenkirche in Soest as a regional centre for theory, practice, research and development of new monument technologies”. The extensive and difficult restoration measures that are necessary on the neo-Gothic towers – that are to take at least 1-2 generations – necessitated the construction of a new masons’ lodge and workshop. It is the third in the history of the Wiesenkirche, following the medieval masons’ lodge that existed from around 1313-1520 and the second from 1846-1882. The project is supported by the Board of Trustees.

The body responsible for the masons’ lodge and workshop at the cathedral is the not-for-profit Westphalian Dombauverein [Cathedral Construction Association]; it is led by cathedral master builder, as also commissioned by the building owner, and in order of the chairmen.