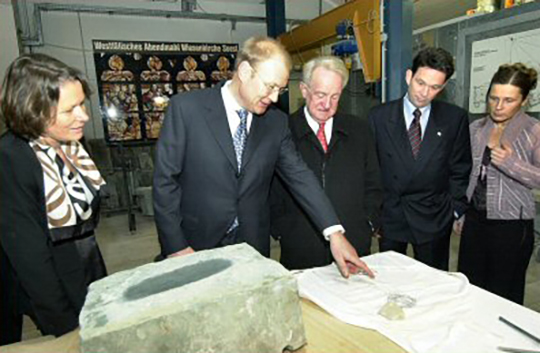 Carving the stone in the workshop, from left to right: Christina Rau, Jürgen Prigl, Johannes Rau, E. Ruthemeyer with wife; the white stonemason’s apron has now been signed a number of times, the first to do so was Johannes Rau who, upon signing at the opening to the builders’ hut in 1994, was NRW Prime Minister.

Johannes Rau presided over the board of trustees of Wiesenkirche Soest as Prime Minister since 1985. This role was subsequently retained by the office of Prime Minister of North Rhine-Westphalia.

On 13 April 1994, he inaugurated the workshop of the masons’ lodge at the cathedral and then contacted the Dortmund Chamber, after which the master school for stonemasons and sculptors was formed in the masons’ lodge of the cathedral, which subsequently resulted in the development of a European network (www.eacd.cc), which has taken on the role of caring for the knowledge and skills that will continue to be of fundamental importance in cathedral architecture.

Johannes Rau accompanied the restoration work at the Wiesenkirche with personal visits and letters. Here, on 20 December 2003, he signed a stone in the workshop for the “Gate of Peace” [Friedensstor] at Kinderfeldkirche, with a bible passage that he personally devoted. “Thus let all Your enemies perish, O LORD; But let those who love Him be like the rising of the sun in its might. And the land was undisturbed for forty years” (see also Kinderfeldkirche project – Impressions).

On 30 June 2004, at the end of his term as Federal President, the cathedral’s master builder engraved an inscription to him on the southern tower of the Wiesenkirche; unfortunately, Johannes Rau’s wish to see this stone in person, as expressed in continued written correspondence, was not fulfilled. He died on 27 January 2006. At the major social event held for Christmas 2003, the idea was raised of holding the state’s advent concert regularly in our majestic church in the future with attendees annually invited by the Prime Minister.