Awarding of the Hanseatic Prize to Master Builder, Jürgen Prigl

A report by Heinz Lenz

“In recognition of his exemplary civic engagement to unite people in true Hanseatic spirit”, on 21 May 2005, Jürgen Prigl received the Soest Hanseatic Prize.

The jury was made up of FDP councillor, Ms Regine Gebhardt, the former Cultural Affairs Officer of the City of Soest, Mr Bernhard Topp, the director of the Volksbank Hellweg, Mr Wortmann, and the initiator and former head of the local editorial office of the Westfalenpost, Mr H.G. Sanke.

The head of the Westphalian Builders’ Hut, Mr Jürgen Prigl, was destined to receive the prize this year. The prize can be awarded to groups or individuals.

Of the many letters of congratulation, Federal President a.D. Johannes Rau’s was read aloud and quoted several times by WDR Director, Fritz Pleitgen.

The chief editor of Westfalenpost, Mr Bodo Zapp, gave praise with humorous words. He commended the native Swabian, Jürgen Prigl, not only as an outstanding specialist and stonemason, but also as someone marching for the “cause”. The fact that Jürgen Prigl has raised the prominence of the Wiesenkirche and its builders’ hut in the national and international context was recognised.

Bodo Zapp expressly praised Prigl’s integrative force amongst European master builders and stonemasonry as a Hanseatic ambassador of the city of Soest. 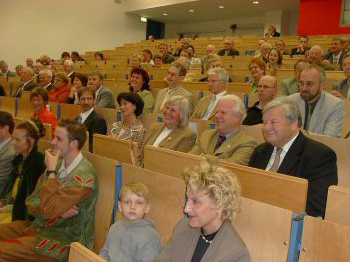 (2nd row from right: Mr Topp, Mr Sanke and Ms Gebhardt; Mr. Wortmann is not in the picture) 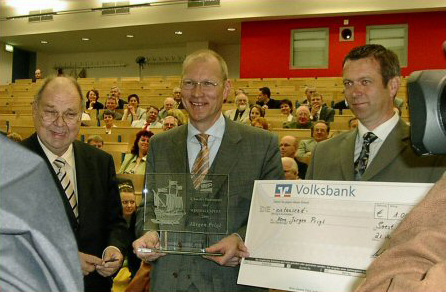 On the left, chief editor, Bodo Zapp, and on the right, the head of the local editorial staff of WP, Hans-Albert Limbrock